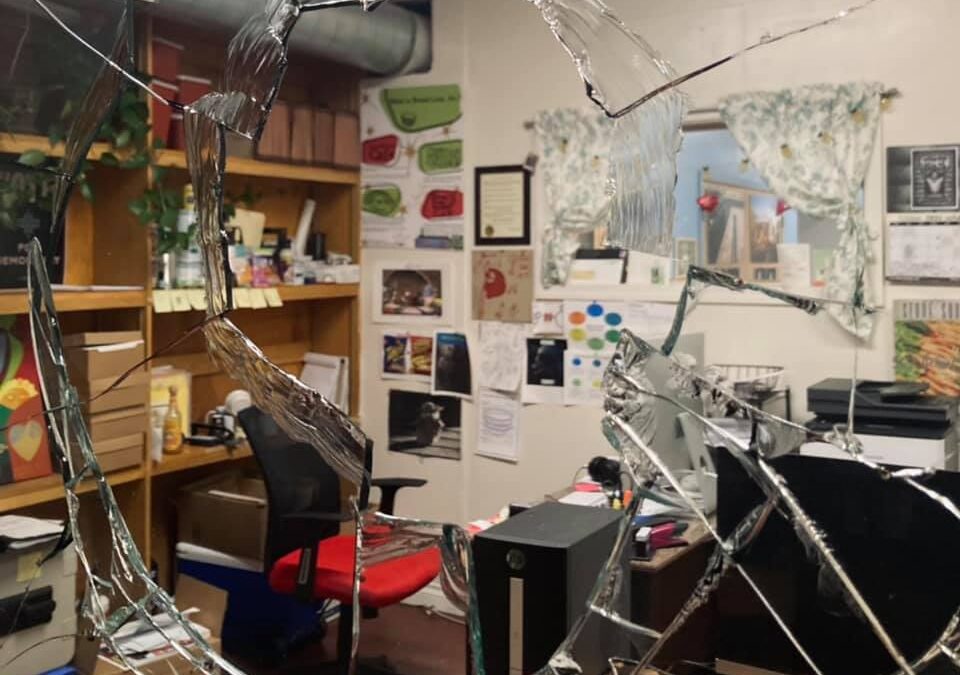 Early in the morning on October 25th, someone threw a large rock through the Bread Line’s office window – an alarming act of vandalism that scared the staff & caused a fair deal of damage to our little soup kitchen. Fortunately, no one was hurt & that’s what is most important. It is also important to remember that while one person chose anonymous destruction, we served over 100 people that same morning who did not. Monday’s guests at the soup kitchen were appalled that someone would do something like this to the Bread Line. The actions of one do not reflect the values of the whole. We took the opportunity to hold space for the realities that allow things like this happen: when people feel powerless, they act out in ways that make them feel in control. It’s not an excuse for bad behavior, but context is key to understanding the why. While deeply unfortunate, a window being broken isn’t something we can take personally. We hope whoever did this will reflect on their actions & make less harmful choices in the future.
However, there is a silver lining: Fairbanks is called the Golden Heart City for a reason. Hours after the incident, the fine folks at Hoffer Glass took measurements of the window & were planning the replacement at a deep discount. Meanwhile, our wonderful friend, David Costello, took a break from his work to properly board up the broken window & brought a board member from the Rasmuson Foundation, Rebecca Brice, with him. While David secured the building, Rebecca helped secure funding to buy much-needed food for the soup kitchen. At the same time, another friend – all the way in Anchorage, set up a GoFundMe to help cover the insurance deductible. Within 12 hours of the window being smashed, an incredible outpouring of support from this amazing Fairbanks commUNITY had this little soup-kitchen-that-could all patched up & feeling so loved. 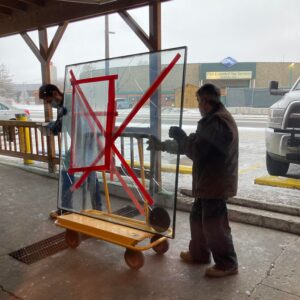 Thank you Ryan VanReenan & Hoffer Glass for making quick work of a big problem! Our boundless gratitude also goes out to David Costello, Rebecca Brice, the Rasmuson Foundation, Julia Terry & EVERYONE who helped turn a bad situation right around. We are so grateful to be in commUNITY with each & every one of you.

There are no upcoming events.